It’s obvious, I love guinea pigs. And whenever I see a product that incorporates my love of guinea pigs… I have to have it! Recently… I came across an awesome looking guinea pig duvet and went down a bit of a rabbit hole. So, thought I’d share my favourites with you guys. Personally I think these duvets work really well for a kid’s bed depending on the age (and the size of the bed). These Guinea pig duvets can act as a really great gift idea for Christmas, birthdays or just one of those spur of the moment treats. 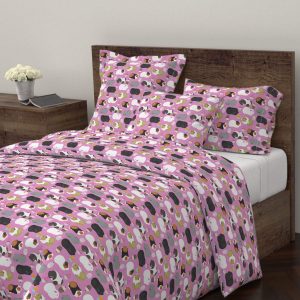 Roostery make quality, made to order, custom duvets. Luckily for us, one of their duvets just so happens to incorporates guinea pigs on it!

Keep in mind, due to these duvets being custom made and made to order products, delivery may take slightly longer than normal.

Unlike many other products out there, these guys use 100 percent cotton. This creates that extra cozy feel and helps a lot with the breathability of the material. The cotton is Italian satin which is a natural, high quality material. The ink used in the duvet is also 100 percent natural meaning no nasty or harmful chemicals.

The sizes range from twin all the way to king. Once again, this is one of the few companies that make guinea pig duvets large enough for a king size bed!

The design featured in the photo is displayed on both the front and the back of the duvet. 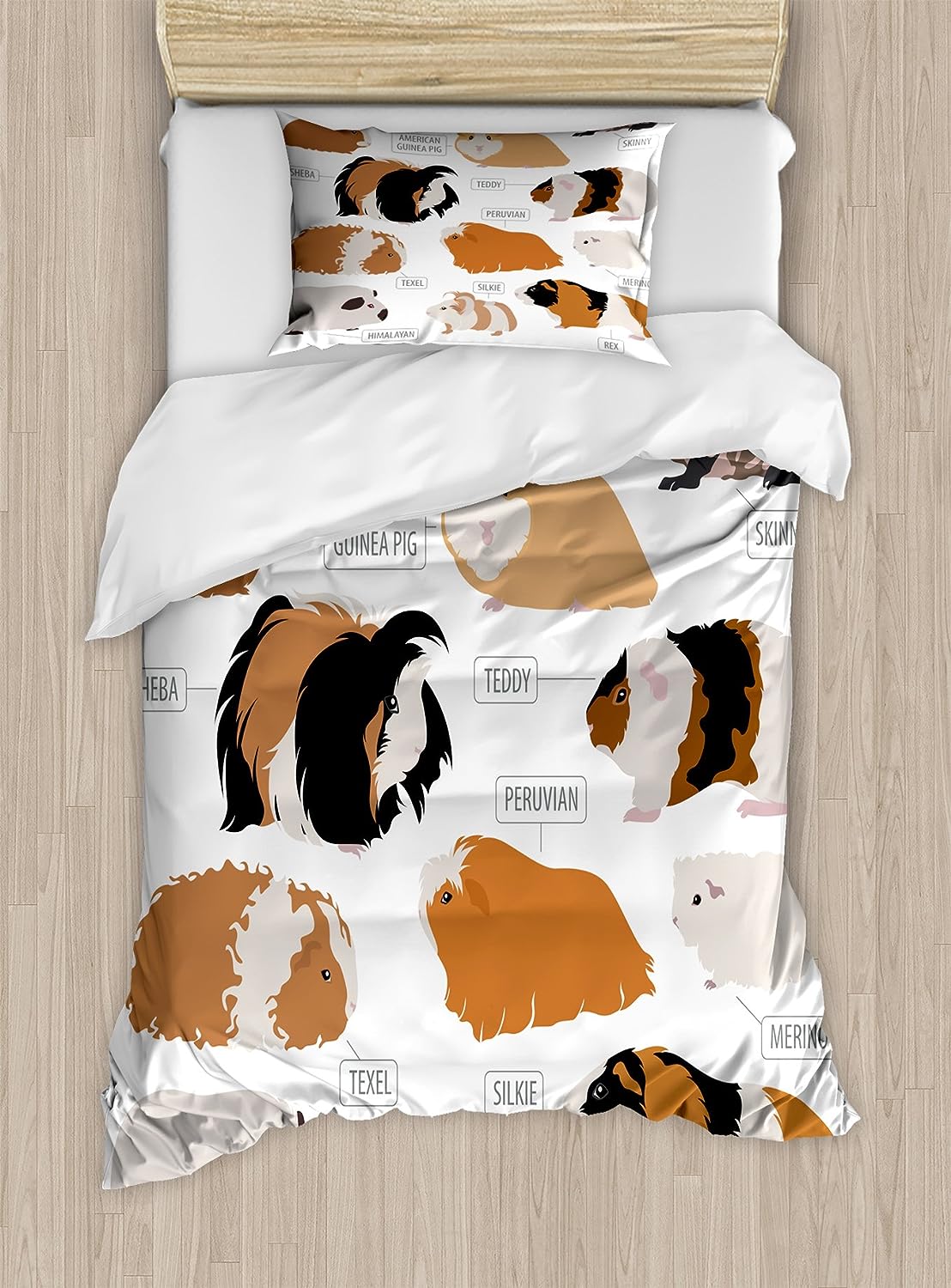 One of my favourite guinea pig duvets has to be from Lunarable. Now these guys have lots of different designs that you can imprint on their duvets and this print with guinea pigs are actually one of many different prints they offer.

On the right you can see a pretty self explanatory photo of the duvet itself. The duvet displays different types of guinea pigs that exist around the world. Personally… I love it.

The materials these guys use are made from 100 percent recycled material. There are no harmful chemicals or dyes used in this duvet which is fantastic. The designs are actually laser printed on the duvet itself which means no bleeding in the washing machine. Keep in mind, this duvet only has the images printed on the front facing side.

Also note, that this duvet does not come with a comforter. The sizes range from twin all the way up to queen 🙂 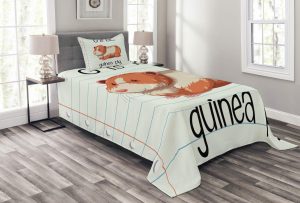 Next up in my list of cool guinea pig duvets is a duvet from… well the same company as before: Lunarable. These guys make an awesome duvet, so why not recommend them twice 🙂

This duvet is made from a double brushed high density polyester. What does this mean? I don’t blame you for asking. In layman’s terms, it basically means the duvet is soft.

While being soft, the duvet is also dense and heavy enough to insure a nice degree of warmth and that the spread wont fall off the bed. Unlike a lot of other companies, these make dye free guinea pig duvets. This prevents (as mentioned above) bleeding and the presence of toxic chemicals. How do they do this? Well, its simple, they use laser printing instead of dying. In my experience, this creates a cleaner and crisper image along with the added health benefits.

These guys have sizes ranging from twin all the way to queen. Each size has been deliberately oversized to insure it drapes over the bed nicely.

I also really like how versatile this bedding is both in terms of age and gender. This guinea pig duvet could go both in a 4 year old girls room or a 9 year old boys room. Perfect! 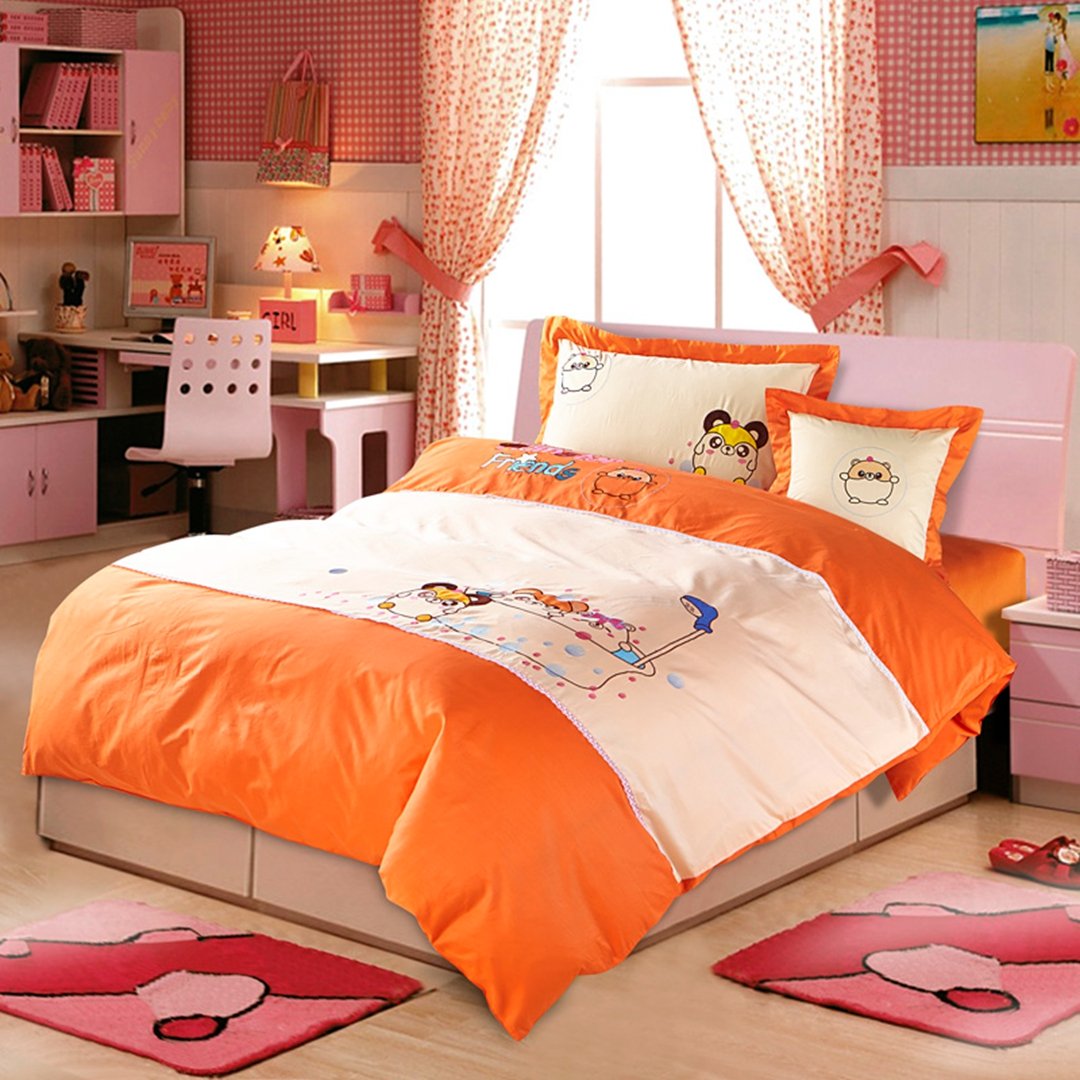 colour orange as you can probably tell by the titles in this article. So you know when I saw an orange guinea pig duvet… I fell in love!

The only reason I put this as number 3 is due to the price. I love a bargain and this option is a bit $$$. Anyway let’s get to it:

You can get this duvet in two sizes, queen and twin. The design features some cute little guineas on the middle and on the pillow case. I would personally recommend this set for younger children. The designs are very childlike which makes this guinea pig duvet a bit more age relative.

The duvet comes with a zipper on the side which allows you to easily insert your own comforter. Keep in mind, this product does not include a comforter. Instead, you get a duvet cover and a pillow case. 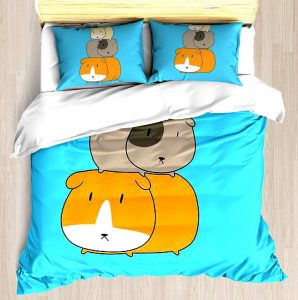 Using brushed microfibre fabric, Sinoval have also made a pretty awesome looking duvet. Now, you definitely have to like the colour blue to like this duvet, so if you don’t, move on 😛

These guys were the only company I could find that made duvets in sizes all the way up to King (excluding my first recommendation). So a king size guinea pig duvet means you or your kid have a pretty large bed… I salute you.

The duvet is advertised as being stain and wrinkle resistant. How this is done, I am not 100 percent certain certain. However, if you are curious, check out there customer interface here and fire them a question.

Seeing as though the duvet is made from microfibre, your best bet when drying this duvet after a wash is to ‘air dry it’. The microfibres dry a lot quicker than most other materials such as wool.

Now, all of these recommendations are for duvets rather than comforters. The comforter is the filling within in the duvet and as far as importance goes, this is top of the list. The duvet cover is for the look, the filler is for the function.

If you get a good filler, the rest should follow. Get something that is going to keep you warm and is made of good material. Down (goose feathers) are up the top in terms of quality but are certainly gonna be more expensive. As you go down the price range you will be looking more at synthetic materials. Fill power is another key term you want to look out for. This is basically the ‘plumpiness’ measured in numbers from 450 to 900. 900 is considered a very plump duvet whereas 450 is… well… less plump.

There is also such thing as a hypoallergenic down duvets which provide the same sensations that a down duvet would provide you just without the risk for allergies. Silk duvets are perfect example of this type of duvet. You can also get hold of synthetic duvets like micro fibre and hollow fibre. For a full explanation of the difference between these kinds of duvets, check this link out here.

Choose for the Climate

Make sure you get a duvet that is suitable for the climate. The last thing you want is a duvet too cold for winter or too warm summer. Believe me, you want to find a nice in between. It might even be a good idea to get a few duvets and fillers for different temperatures and seasons.

Now, if you were a bit confused as to why I was recommending guinea pig duvets for people and were actually interested in beddings for guinea pigs… do not worry. I have written a whole article about the best types of guinea pig beddings out on there. To read that article, just click this link here.

Well, that’s the end of the article… any questions, feel free to ask, I love hearing from you guys 🙂