If you are reading this article, odds are, your guinea pig has contracted ringworm, or at least shows some of the symptoms of having contracted it. So I am quickly going to recommend a product that can really easily and safely get rid of your guinea pigs ringworm. I typically use this shampoo called ‘Ring Out Shampoo‘. 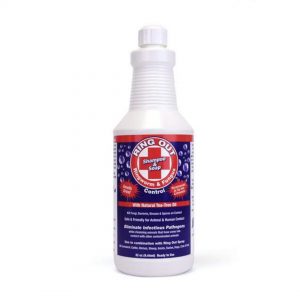 This stuff safely gets rid of all the bacteria and fungus that will be harming your guinea pig. On top of that, unlike most other shampoo’s, rather than just washing them onto the ground, this shampoo will instead kill them all together, preventing the infection from reoccurring.

It was made using food grade chemistry which means… that this stuff will not irritate or harm your guinea pig’s skin, which is always the number one priority 🙂

Here’s Everything You Need to Know About Ringworm in Guinea Pigs.

The name ringworm refers to a fungal infection on the surface of the skin. It got it’s name because, long ago, people believed that the infection was due to a worm, but it is not. Ringworm is a fungal infection in the skin, usually caused by the Trichophyton mentagrophytes fungus. However, there are several common fungi that can cause ringworm – usually from a species of the genus Trichophyton or the genus Miscrosporum. The medical term for ringworm is tinea. Tinea is the Latin name for a growing worm.

The ringworm fungus is a dermatophyte, which means “skin fungi”. An infection with these fungi is sometimes known as dermatophytosis. The fungus can only live off the dead layer of keratin protein on top of the skin, so it will not usually invade and go deeper. It cannot live on mucous membranes, like in the mouth or nose.

What Are the Symptoms?

If your guinea pig has ringworm, the first thing you’ll probably notice are itching/scratching and bald patches, usually starting on the face and then spreading backwards along the back. If you look closely, inside the bald patches there will be red, scaly circular patches made up of concentric rings of overlapping scales.

How Do They Get It?

Ringworm can be caught from other animals or people who are infected with it, or from the soil, or from anything that touched infected soil. Bedding can become infected with it, as well, so if your guinea pig has it, change the bedding frequently until the infection is gone. Oftentimes, you cannot pinpoint exactly where it came from.

Can I Catch It?

Yes! Ringworm is very contagious. Of course, it also depends on which organism is causing the ringworm. Some of the ringworm fungi are only passed from people to people, some are able to be passed from animals to people, and some are passed from soil to animals or people. Anthropophilic species prefer people over animals, some geophilic (meaning “soil-loving”) species live in soil but only grow on feathers exclusively (or horses, or cattle…), and some prefer animals like guinea pigs and humans. But if it lives on a guinea pig, it can live on you, so handle an infected guinea pig with care. Wear rubber gloves and wash your hands immediately after handling him or her.

The ringworm fungus loves heat and moisture, so it’s important to keep the infected area dry. Also make sure the environment is clean and dry – not damp with urine or water.

How Do You Diagnose Ring Worm In Your Guinea Pig?

You might be able to diagnose it just by looking at it and seeing the circular scaly patches. But a vet can use ultraviolet light and skin scrapings to diagnose it, as well. They could do a potassium hydroxide (KOH) preparation of a skin scraping and then view it under a microscope to confirm the diagnosis of a fungus.

How Do I Treat Guinea Pig Ringworm?

Ringworm needs to be treated with an anti-fungal medication, either topical or systemic. If the infection area is small, the vet might want you to apply a topical anti-fungal ointment for 7-10 days. If it’s more widespread, they might just want to administer anti-fungal medicine taken orally for several weeks (usually 5-6 weeks). I also recommend putting your guinea pig on some PRObiotics (not antibiotics). This will help regenerate your guinea pig’s immune system in a healthy and fast way.

What If I Want To Treat It Without Going to a Vet??

You can use a medicated Dandruff Shampoo like Head & Shoulders and bathe the guinea pig once a week for three weeks, making sure to rub it in on the affected area. After the bath, apply topical over-the-counter anti-fungal cream (like for athlete’s foot). Rub it into the affected area twice a day for two weeks.

What If I Have Multiple Guinea Pigs?

Because ringworm is contagious, you need to separate the infected guinea pig from the non-infected ones until the infection is cleared up. Also make sure all of the cages and living areas are cleaned and sanitized.

Is There a Way to Prevent It?

Well, obviously, prevent him from coming into contact with it! But, more practically, keeping the cage, bedding, and environment clean will help prevent any infected material from building up and becoming a main source of contagion.