Guinea pigs need hay, but which type is best? What are all the options? What’s the best way to store it? How long does it last in storage? Here’s what you should know about Guinea Pig Hay.

Plenty of Hay is Essential

Hay is nothing more than a type of grass or legume that has been cut and dried to be used as food for animals. Guinea pigs need plenty of hay in their diet. In fact, about 75% of a guinea pig’s daily diet should consist of hay. You should always have hay available for your guinea pig to eat. These are the benefits that hay offers your guinea pig:

When you go to a pet store, you will most likely find Timothy Hay and Alfalfa hay sitting on the shelves, but these are not the only hays available. Some other hays that you can get and feed to your guinea pig include:

To find these different hays, you can contact farms near you and ask if they have any. Check your local feed stores, as well. Sometimes you can get a whole bale of hay for $7 at a feed store. To find places online to order different types of hays, check out:

What is the Best Way to Store Hay?

The important thing to note about hay is that if it gets wet or damp, it can mold. Make sure you keep your hay dry. You can help make sure it stays dry by keeping it away from moisture-prone areas and make sure it gets plenty of air. Setting it directly on the ground or on concrete can wick moisture up into it, so it’s best to keep it stored up off the ground.

Hay is highly flammable, so keep it away from any source of heat.

If you store hay outside or in an outdoor building, make sure it’s covered with a tarp or something else to keep moisture out of it. Hay stored outdoors is prone to collecting moisture from the humidity in the air.

Indoors, you can store the hay in a closed container or plastic bag if it is very dry. You can opt to store it in a bin or laundry hamper if you want more ventilation.

How Long Does Hay Last?

Hay tends to last a long time without much nutritional loss. How and where it is stored plays a role in how long it will last. If you store hay in a dry area in an outdoor shed, and it’s kept off the ground, it can last for years. Many people prefer to make sure they use up their hay within one year, however.

What’s the Difference Between Alfalfa Hay and Timothy Hay? 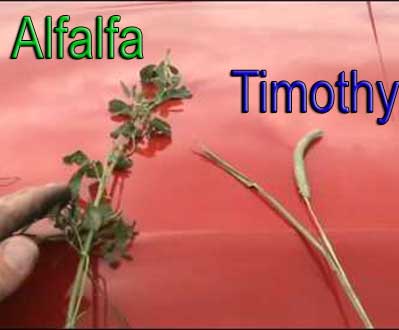 Because of the higher calcium content, you should only feed alfalfa hay to young, pregnant, nursing, or sick guinea pigs. A high calcium content has been linked to the formation of bladder stones, to which guinea pigs are quite prone to developing. Guinea pigs can become obese, as well, so giving Timothy Hay instead of Alfalfa hay helps prevent excessive caloric intake.

What’s the Best Way to Feed My Guinea Pigs Hay?

The best way to feed your guinea pig hay is to make sure he always has access to it, and that it stays clean and dry. It’s better to use a hay rack that you hang on his cage to keep the hay from getting soiled, wet, or wasted. You can stick some hay inside a toy or a paper bag or a toilet-paper roll and use the hay to provide some amusement for him. He will enjoy trying to access the hay.