Hay Feeders For Guinea Pigs are one of those essentials if your little guy’s diet consists of a heavy hay intake (little pun there for ya 🙂 ). There are plenty of hay feeders for guinea pigs out there. Personally, I prefer to go for the feeders that are both functional, but also look nice. When you think about it, a guinea pig cage is a pretty big object and it takes up a lot of space. The last thing you want is for this big thing to end up being an eyesore, and believe me, I have seen some pretty ugly cages. You want proof? Check out these cages on Amazon here, there like 10 bad cages for every nice looking one.

Now, if you don’t have a lot of time on your hands and you just want to see my number 1 recommendation for in regards to hay feeders for guinea pigs simply click the link below: 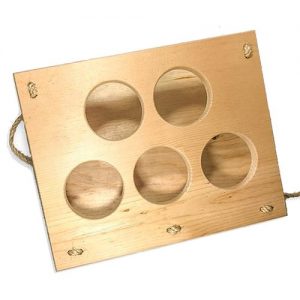 I love anything made by Small Pet Select and this hay feeder is no exception. On top of that, I am not the only one who loves it, don’t believe me, check out the reviews here.

So, my recommendations for a gay Feeder For a Guinea Pig have been made according to a few factors.

The last thing you want is to end up buying some shoddy product that falls apart after a few months of use. On top of that, you want to get something that is actually going to function as it was designed to. If your guinea big can’t get the hay from the feeder, what is the point of having one in the first place?

Like I said above, the last thing you want is an eyesore. Anything I recommend is something that I think looks nice. Now I know this is very subjective, but none the less, I think I have pretty good taste 😉 Little hint for you, I love things made out of wood.

Owning a guinea pig can actually be pretty pricey initially. The last thing I want to do is point you in the direction of a  guinea pig hay feeder that is too overpriced.

While I do consider myself a bit of an expert when it comes to guinea pigs, I think having other people’s opinions can always help. I have taken into consideration other people’s thoughts on certain hay feeders as well as average review ratings to help me form a less bias opinion!

So Let’s Get To It

So, as I mentioned before, I love the stuff Small Pet Select makes and puts out on the market. I have actually talked to these guys a few times to get their opinion on certain things and they came across as very knowledgeable and were incredibly helpful. They have produced a hand made hay feeder for guinea pigs that is just awesome!

The hay feeder comes in two sizes: the small hay feeder for rabbits and the large hay feeder for guinea pigs. Why the difference? Well guinea pigs can eat a lot of hay (check out my best hay for guinea pigs recommendation here). Typically, a guinea pig can eat about its own size in hay each day which means, you need a pretty big guinea pig hay feeder. Small Pet Select has you covered with their larger hay feeder 🙂 The larger feeder is slightly more pricey ($5) but if you want, you can go for the cheaper option. If you do, just make sure you monitor the hay feeder a bit more regularly to see if your little guy runs out of hay.

Well, I certainly wouldn’t make Small Pets Select’s hay feeder my number one recommendation if it didn’t meet the functionality and quality factors. These guys have made sure that harmful glues, nails or chemicals were removed from the equation when producing this hay feeder. When you think about it, the feeder is pretty bare bones, just wood and rope! Now the wood has not been treated with any chemical coating which is great for your guinea pig’s health (chemicals can cause a range of guinea pig illnesses). However, due to the lack of coating, I do not think the hay feeder would hold up very well in the rain. So just make sure you keep the feeder under cover.

As far as feeders go, this one looks the best (in my opinion). Its clean looking, compact, and who doesn’t love that wood look. If anything, this will not only compliment the cage you put the feeder in, but make it look even better (I know, so salesy of me hahaha)

This is actually one of the highest rated hay feeders currently on Amazon. The thing people most like about this product is both its durability and the safety aspect of the feeder. Unfortunately, when it comes to pet products, a lot of things can fall through the cracks in regards to the health sides of things. This is largely do to the lack of restrictions within the industry. As a result, we have to rely on companies to do the right thing. Fortunately, Small Pet Select has done just that and made a product that last, and is in no way dangerous for your guinea pig.

Now, if you are after something a bit cheaper and a bit a less refined (in my opinion) as far as looks go, then Niteangle have just the thing for you. Personally, I haven’t had as much experience with these guys as I have with Small Pet Select. But, from what I have heard, these guys make some pretty darn good products, and this hay feeder is no exception. 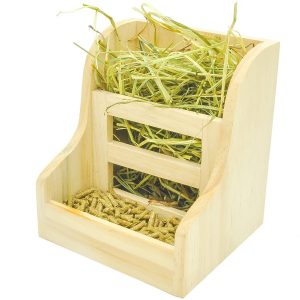 So the cool thing about this hay feeder is that you can also hold some guinea pig food pellets or types of food in the bottom segment. The only problem I can see arising with this is that your guinea pig will need to crawl over the pellets to get to the hay. No big deal right? Actually, this can mean that occasionally your guinea pig will pee and poop in the food tray below and contaminate the food. This may mean you simply need to change out the food on a more regular basis or simply put a bit less food in the bottom segment. Alternatively, get yourself a guinea pig bowl and put the seperate food in there (better safe than sorry).

So, I kind of touched on this above, but the only issue I can see functionality wise is that your guinea pig may poo in the carrier section below where you store the hay. Apart from that, the feeder is great. It comes with an easy to use snap-lock bracket system that attaches directly to any wire cage. On top of that, the wood doesn’t contain any harmful chemicals, glues or nails (except that one screw you can see in the photo).

Personally, I think anything made from wood looks great. This is especially true when it comes to wooden guinea pig hay feeders. The feeder isn’t so large as to take up to much space in your guinea pig cage but not to small so as to make it hard to feed your little guy enough hay.

So there were two reasons I didn’t put this feeder at the top of my list. One, because I have had more experience with Small Pet Selects stuff in compared to Niteangle’s. Two, what other people are saying. Now, people aren’t saying anything bad about this product, but the reviews just are not as high. In saying that though, it is pretty hard to beat Small Pet Select’s 5/5 star reviews with these guys getting roughly about 4.5 stars. When you think about it, 4.5 stars is not bad, not bad at all, but its not enough to take out number one! None the less, this is still a damn good product!

Now, ZDJR is not exactly the best name for a guinea pig supply company, and to be honest, I don’t it is a great name for any company. However, they still make a pretty good guinea pig hay feeder. 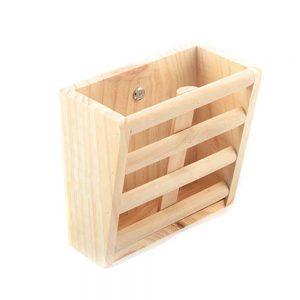 This feeder is made from wood (clearly) and by now, you have probably realised that I love that material. Wood just looks nice, but unfortunately its a bit of a catch 22. If you leave your guinea pig cage (and therefore hay feeder) outside, the rain can have a pretty negative effect on the material. The only way to prevent this from happening is for the wood to be coated with a waterproof paint or coating which can be pretty detrimental to your little guy’s health. Wood based products are great, but even better if you keep them from being exposed to the elements.

As far as functionality goes, this guinea pig hay feeder certainly out paces my second recommendation. Why? Well, unlike the Niteangle’s hay feeder, this feeder does not have a seperate slot for other foods. This means no chances of contamination from your guinea pig walking over the food and peeing or pooing over it. This may mean you want to take a look at getting a guinea pig bowl to keep other types of food seperate. Don’t get me wrong, I like the little added bonus that is included in Niteangle’s hay feeder, I just don’t think its super practical.

This hay feeder by ZDJR is also incredibly easy to mount with a back mount that you can apply to any part of your cage. Quality wise, this feeder is top notch, but like I said, you will want to keep the feeder away from the elements (rain and wind).

It’s made from wood, what more can I say! I’m joking but honestly, I do like the way this feeder looks. On top of that, the feeder is not overtly large so as to not look super awkward in the cage.

Now, I have actually been unable to source many reviews from other people in this case. So due to the lack of information, I am going to have to leave this section relatively light in compared to my other recommendations.

Some More Information On Hay Feeders For Guinea Pigs

Before I finish up with this article, I just wanted to make a few notes on hay feeders and more specifically, guinea pig hay. Guinea pigs need a balanced diet, just like humans. This means, you will need to switch up what they are eating every now and then. Don’t just feed them hay, compliment their diet with red peppers, carrots or a huge range of other foods guinea pigs can eat (more on this here).

Hay can also be used as a form of bedding for your guinea pigs (check out my recommendations here). However, the only issue with this is that the hay can go dry very quickly and there is therefor an increased chance of your guinea pig getting and unwelcome piece of hay in its eye. This can lead to a host of other problems and illnesses further down the line. Typically, I recommend other forms of material when it comes to bedding.

One last note, when buying hay for your guinea pig, make sure you buy just enough to last as long as the hay will stay fresh. A lot of people see that you can buy bulk hay for a cheaper price but this actually means you end up having a lot of hay on hand and unless your guinea pigs eat it all in time, it will probably go off and be completely useless. Only buy as much as you think you will need and no more. Plus, experiment with different types from different suppliers, there is a whole range of options out there.

If you guys have any questions, please don’t hesitate to ask, I love hearing from you guys and I’ll do my best to answer your questions ASAP.